Last winter we were inspired to do another photo shoot after our Milk and Cookie’s styled shoot. However, the weather in Seattle is unpredictable (it was pouring rain in July this year) so to plan a shoot in winter would not work (especially since we wanted it to be outside). We patiently waited for summer to come and we are super glad we did because our friend Rosie of Simply Rosie Photography  was down from Canada and agreed to photograph it (woohoo)!

As you can probably tell by the title, we decided on a sewing theme. We combined our creative juices and came up with something that we absolutely LOVED! We wanted it to be cozy and warm (since a lot of our sewing is done during the long, dreary Seattle winter). We picked bright colors and tried to make it as comfortable looking as possible! 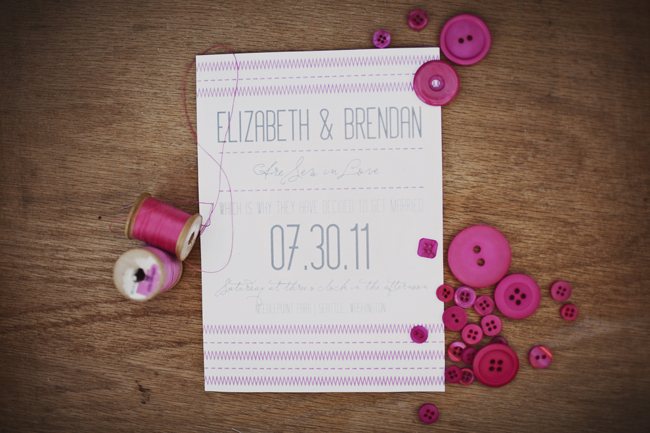 We designed all the stationary for the shoot. The invitation was sewing inspired, but we didn’t want it to be too themed.  You can find it in our downloads section. 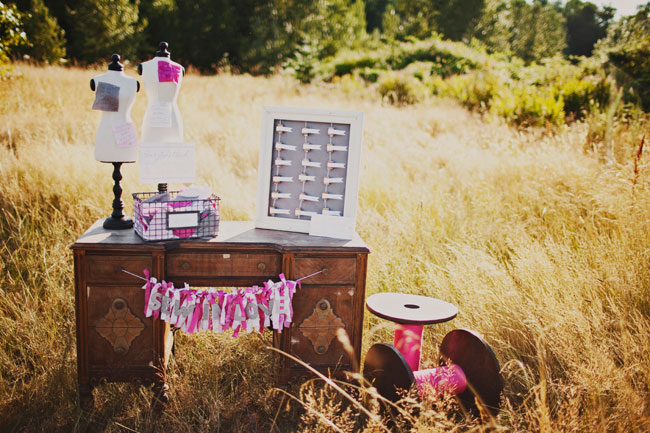 Our guest book table was one of the easiest things to come up with. Ellen has a vintage desk that we used as our table (it was originally painted black so Ellen’s husband hastily striped it down to its natural wood color). Our first thought was to make a small quilt that guest could write their well wishes on, but neither of us had the time or energy to make one.  We came up with the idea of having fabric squares for each guest to write on and at a future date putting it together as a quilt. It worked out great because Aileen had seen these fabulous mannequin at Potterybarn that we both had to have (if you were to look in our houses we have very similar taste). We ordered two, and used them to pin the notes on! 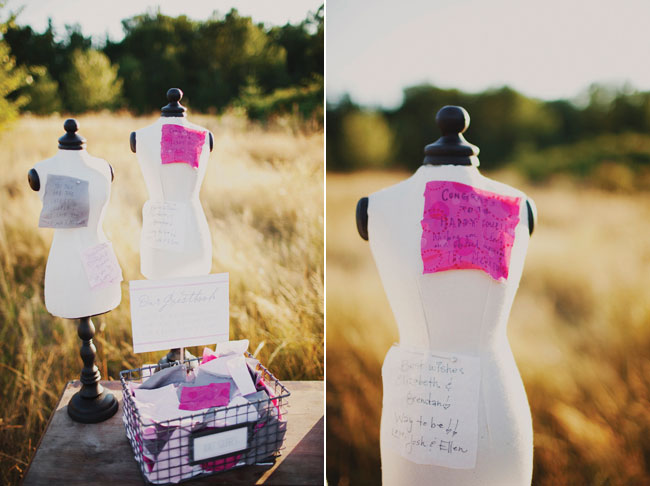 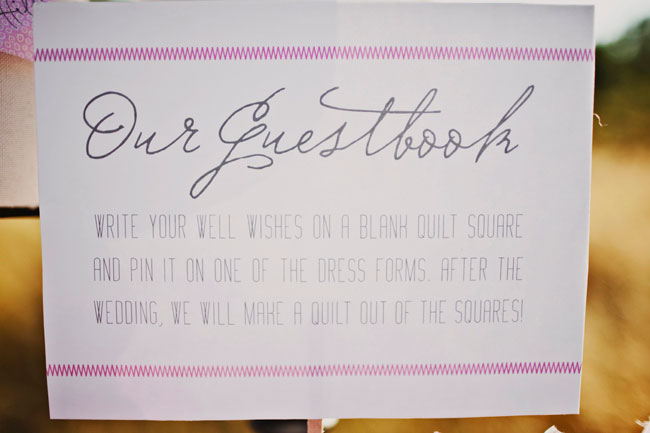 We struggled with the seating chart for a while, but ultimately came up with a fab idea (if we don’t say so ourselves). Ellen inherited a large amount of wooden spools that we wanted to incorporate. We took a white frame that we had laying around, cut out a piece of cardboard, covered it in gray fabric, and taped it to the frame. We then tied string from the top to the bottom of the frame and threaded the spools on it. After that it was all down hill—we printed out names with a table number and wrapped them around the spools. Voilà! 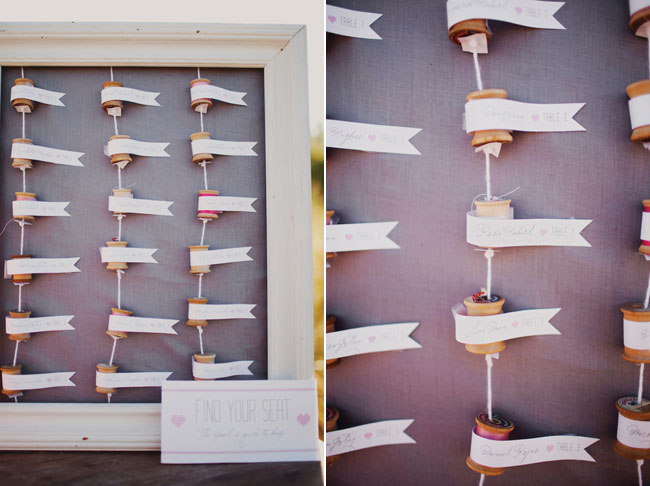 Aileen made the Sew in Love sign that hung from the desk. She cut strips of fabric and tied them to string. Then she cut letters out of cardboard, glittered them, and glued them into place! We found some extra large spools on clearance at Joann’s that we purchased, wrapped in pink yarn and put next to the desk. 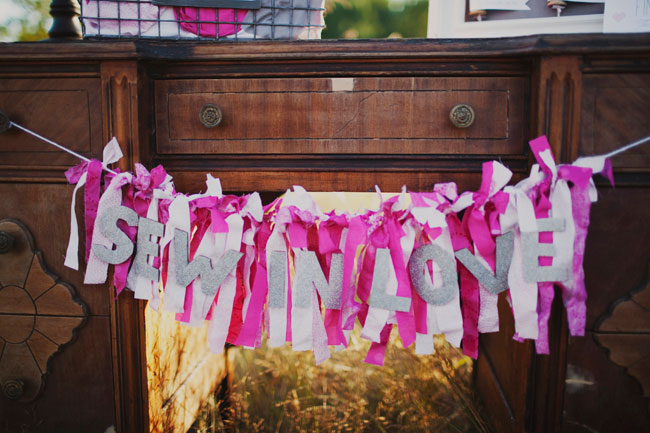 Our beautiful models, Elizabeth and Brendan, are friends of Rosie’s that we are so glad were willing to help–they were amazing to work with! We wanted Brendan to look casual, so we paired a gray sweater from Urban Outfitters with a pair of jeans. He wore a white collared shirt and a pink tie to top it off! Elizabeth we decked out in a Sarah Seven dress (swoon), cute flats from Ruche,  a Lo Boheme hair flower, and jewelry from Vatne Designs. Erin Skipley did her hair and make up–and boy did it turn out perfect, it made the look complete! 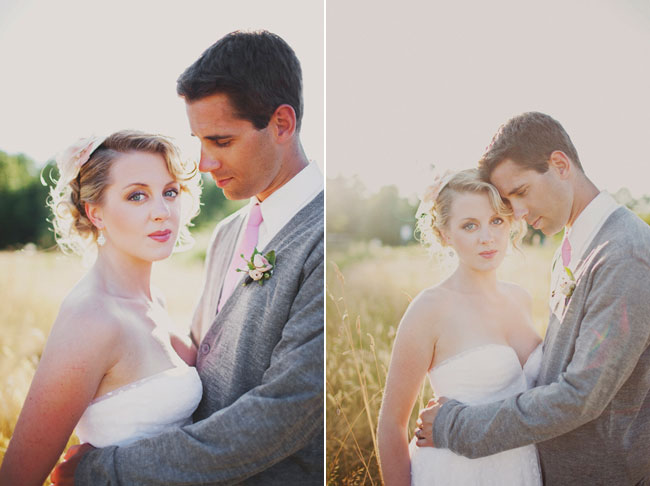 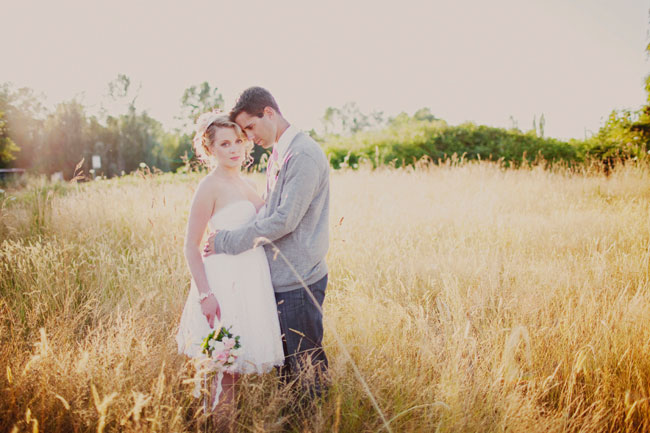 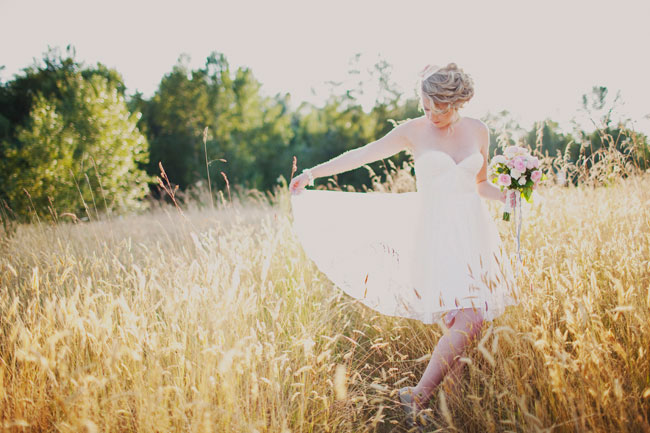 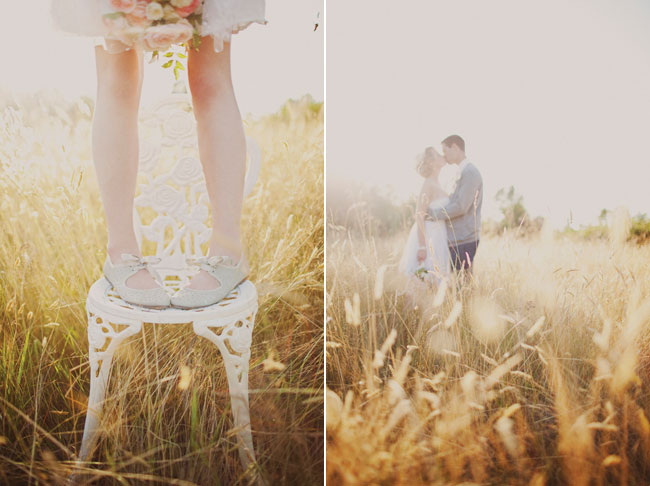 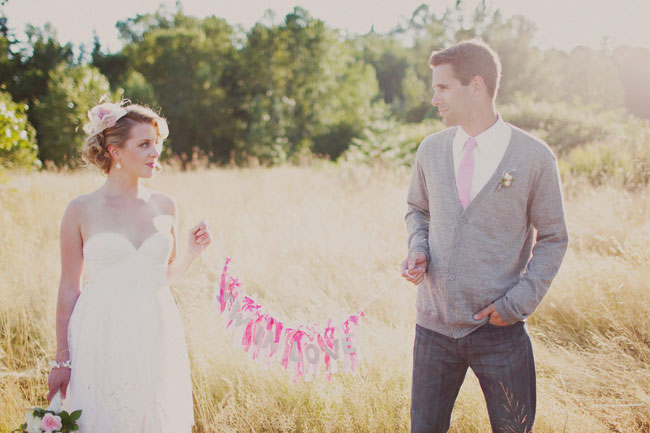 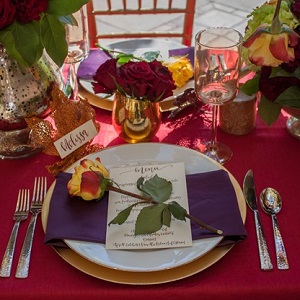