I’ve bought a lot of gifts for 9-year-old boys in my life and if I can say one thing’s for sure, they still looooove their goofy stuff.

You see, they’re at that age when everyone starts thinking about being cool but aren’t quite sucked up enough into the vortex of self-conscious tweendom to care about actually acting cool.

Girls are more mature, of course. All of the girls of that age that I’ve ever known, which is a considerable amount, started acting cool light-years before any of my boys did. But this is a post about 9-year-old boys, so I digress.

And as someone who adores almost all things goofy and fun, nine is one of my favorite ages for which to buy gifts. I had a blast putting together this list and hopefully, it gives you an idea or three for something special to gift the 9-year-old boy in your life.

by Kid Made Modern

If you know a kid who isn’t in love with reading, you may know the magic of the comic book/graphic novel. In fact, studies suggest that comics are a great way to encourage early literacy and establish regular reading habits.

What better way to get them immersed in a culture of creative writing than a gift where they can create their own comics? This fantastic comic book kit includes everything they need to get started and a box to store it all.

Suitable for ages six and up.

You may remember Throw Throw Burrito from our gift guide on Christmas stocking stuffer ideas, and I still say it’s a real winner for family game night. In fact, I spotted it at a friend’s house not long after that article was first published, and she raved about it.

So give it to your favorite 9-year-old and have fun throwing burritos at each other!  Yes, that’s the whole premise of the game. Basically, it’s a fusion of dodgeball and Speed (the card game), with an homage to Mexican cuisine. Adults will love it too!

Suitable for ages seven and up. 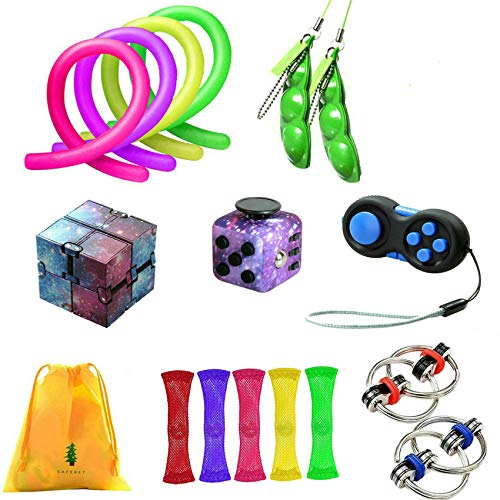 Every 9-year-old I know has varying degrees of “fidgety-ness”  such that, if you stand close enough, you can tangibly feel vibrations emanating from them. I’m convinced they burn three times as many calories just standing still as I do on the treadmill for half an hour. Not that they’d ever stand still for that long, but you get my point.

So let them release some of those mental wiggles with fidget gadgets! Chances are, your kiddo already has plenty of fidget spinners. This set picks up where your standard fidget spinner leaves off with seven different gadgets. Plus, it comes with a handy drawstring pouch for storing and carrying.

If the 9-year-old in your life has a sensory disorder like ADHD, Autism, or Aspergers, fidget toys are a wonderful gift. They help provide more productive sensory experiences, help improve concentration, and increase attention span in the classroom.

(Click here for more information on sensory disorders and how fidget toys can help.)

Suitable for ages four and up. 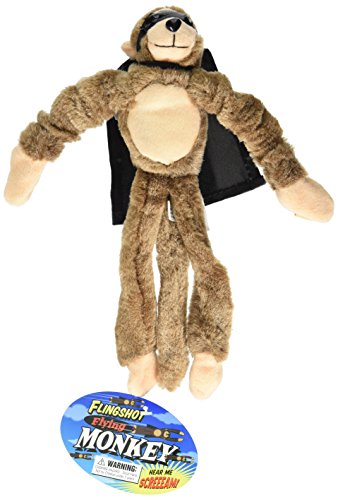 Another one I bought from our stocking stuffer guide for my (then) 9-year-old that turned out to be GOLD. I mean, honestly. It really is hilarious. Maybe a little noisy, but definitely hilarious.

Suitable for ages five and up.

I don’t know why kids love toys that they can stomp on (or things that aren’t toys, for that matter), but it’s a fact of life. So why not get them something that makes it productive?

The stomp rockets can launch up to 200 feet, and the launch stand accommodates two for some friendly rocket-launching competition. The best part? This is a STEM learning toy where they’ll experiment with all kinds of physics without even realizing it. Ha! Too late, you’re already having fun, kid.

Suitable for kids six and up.

My mother-in-law (also known as the best grandma EVAH) got this one for my littlest, and it’s a lot of fun! The fabulous scientists at Crayola have come up with 50 cool STEAM and STEM experiments for this kit where kids learn about art and science all at once. Love it.

Just a heads-up, it isn’t completely self-contained. You’ll need to run to the store for a few of the items required to do conduct some of the experiments. Also, adult supervision is recommended. In fact, you’d better stay close-by because they’ll most likely need your help for a few of them.

Suitable for ages seven and up. 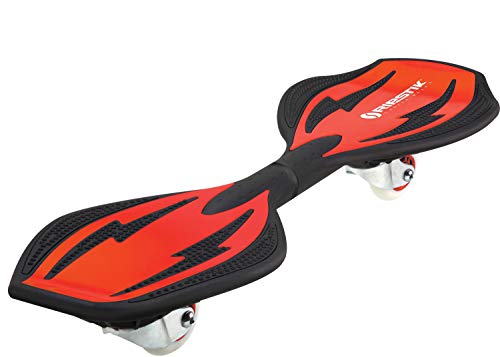 My kid has spent hours on this thing with a smile on his face the entire time. I tried it myself, and I’ll just tell you up-front if you don’t have the ab strength of a 9-year-old, it’s not so easy.

He learned how to glide around effortlessly on it in no time flat, so I’d be willing to bet your kid will too. Just make sure your precious wears his helmet for the inevitable falling.

Suitable for kids ages eight and up.

Pricey, I know, particularly for a 9-year-old, but this one turned out to be well worth it. It was a Santa gift a year ago, and between playing at home and friend’s houses, he’s had a blast with it. You can play with up to four other players on one Switch, and it’s super portable.

For the record, he says his favorite games to play with friends are Splatoon 2 and Mario Kart, but he really likes Super Mario Maker, too. I think you can’t go wrong with anything Mario-related, but that’s my old-lady-opinion.

The Switch features parental controls, too, so you can regulate or restrict the games they play, purchases they make in the online shop, their gaming time, and more.

Depending upon the game, the Nintendo Switch is suitable for all ages. 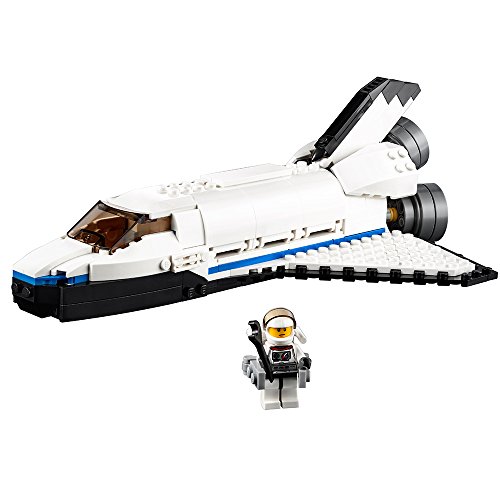 No matter what he’s into, whether it’s Marvel Avengers, building architectural marvels, or real-life Minecrafting, Lego has a set for it.

If they want to do their own thing, there are tons of books available with project instructions, or you can just get him a kit with all of the classic bricks to get creative. They’re fun, they’re great for creativity, and they’re a healthy way for them to pass the time away from a screen. Long live Lego!

Legos are suitable for all ages, from littles to grownups, as long as you purchase sets specified for the appropriate age range.

For the most part, this age isn’t hard to please when it comes to gifts. If you can throw it, squish it, make a mess with it, or it makes fart sounds, you’re golden.

But there’s nothing quite like watching a kid’s face light up when you’ve done your research and managed to pick out a gift that blows his mind. The best part is that for now, you’ll get fantastic hugs to go with those smiles. For now.

?Did you find this post useful? Then save THIS PIN below to your Gift Ideas board for later!???? 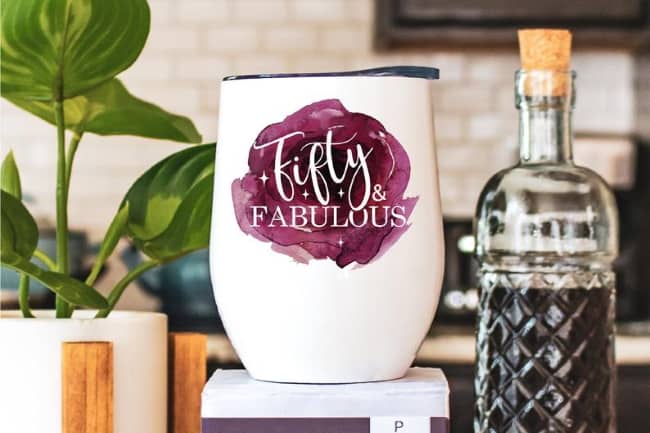 50th Birthday Gift Ideas to Forget They're Half a Century Old! 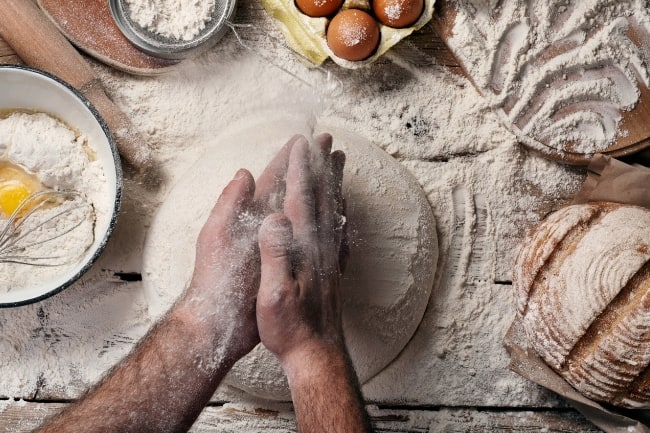 15 Best Gifts for Bakers They'll Use Every Day