​This is the first article in a series about​ all things VR and weddings.

I ​had an opportunity to use a Virtual Reality gaming system earlier this year for the first time at my brother’s house in the UK.

I’ll get to why it was so freaking amazing in a minute.

I will say that as ​a part-time futurist who likes to daydream about future outcomes and scenarios, it got me thinking about how technology like this has the potential to drastically impact the wedding industry in over the next 10 year timeframe.

I say in the future because commercial viability has not arrived yet. At least, not ​like we were promised back in 2016 ​when pundits claimed that VR would catapult ​into the mainstream and every household in America would have a VR system. Subsequent articles in 2017 then played down VR’s failure to launch and mass adoption mishap in 2016.

In my techie-yet-not-quite-geek-status mind, the future of VR/AR looks bright. However, at the present moment I equate the state of VR to Thomas Edison working on light bulb version number 4,500 of 10,000. There is still a long way to go and a lot of other factors must fall into place before we realize the complete VR world we’ve all been promised.

What follows is my experience using a high-end VR system for the first time, and my subsequent thoughts about how VR can transform the wedding industry. Comments are always welcome!

Is the VR/AR Hype Warranted?

It is hard to describe a brand new experience to someone who has never done it. I imagine it would be like seeing snow fall for the first time and land on the tip of your tongue, or perhaps the miracle of your first child being born, or even eating a Dairy Queen Blizzard after a 5 year hiatus.

The exhilaration and excitement create a synaptic explosion in your brain and gives rise to unknown levels of satisfaction and craving.

Okay, maybe VR isn’t quite like witnessing your first born. I do know that the first time I strapped on a pair of goggles and immersed myself in several fantasy worlds ​it was extremely thrilling.

History has plenty of examples whereby radical technology changes ​overthrow the status quo ​and changes how the average citizen ​lives.

Johannes Gutenberg’s printing press in the 15th century comes readily to mind as an example. A machine that enabled masses of formally illiterate common folk to find new freedom in reading, writing, and a better station in life.

More recently, the inventions of the world wide web, email, and social messaging platforms are a prime example of modern day technological change that has fundamentally and forever changed the very fabric of our social and economic world.

​VR/AR has that same potential to change the social fabric of how we​ as humans behave towards one another — how we play, love, learn, and a host of other ​interactions that happen on a daily basis.

My great aunt lived to the young age of 102 years. She was born in the year 1900 on the east coast of Canada, one of eight siblings.

I remember speaking to her when she was in ​aged about 96 and still had all her mental faculties. I sat with her on the upstairs porch, mesmerized in imaginative imagery as she retold a time that she actually remembered going down as a young girl to the ‘wireless’ office in 1912 with her fellow Sunday school mates. In those days, the wireless office meant the telegram station. The class of girls went to hear the operator read ​news in real-time about the sinking of a great ocean liner — the Titanic!

I recall other times, intently listening to stories about the introduction of color television, going to see a movie for the first time at a cinema, or even buying a car when the primary mode of transport was still horse and buggy.

My ancestors taught me many things. One being that the march of technology and its impact on the world is inevitable and incessant.

VR vs AR … What’s the Difference?

​VR tends to take the spotlight in news media and our imagination. Yet AR is the bigger player in terms of commercial viability and rapid adoption. These two intertwined and related concepts are defined as follows:

Both will become ubiquitous in the next decade as technology advances mean better gear (goggles or some yet to be invented piece of hardware) as well as software to run both.

Augmented reality as I understand, is the intersection of the digital and physical world. Think about wearing a pair of glasses that look and feel similar to the eye glasses you may currently wear. The only difference is that these ones have a built in microprocessor and are connected to a wireless internet connection. They can beam information directly in front of your eye(s) as you go about your daily life and interact with the world.

​A simpler example is using your existing smartphone to play ​the hit game ​Pokémon GO. I admit I’ve never played Pokémon. ​Luckily, my 9 year old niece explained the details and let me have a turn catching Pokemon while in London.

​Augmented reality has a great chance of mass adoption and to radically change how our world works, including the wedding industry.

​​Strap on a pair of one of the best VR goggles (I used ​HTC Vive ) that you can get today and step into a virtual world.

Sure, ​early VR fantasy worlds and games on the market are visually crude, but the feeling of actually being ​present in a space is real. The brain analyses the information coming in through visual and auditory senses and makes decisions based on that input. Then it reacts in conditioned ways.

What do I mean by conditioned ways?

I suspect ​a first time VR experience is similar for ​most. Let me tell you about my virgin VR initiation.

Controllers in each hand and VR Goggles strapped ​snugly around my head, I was immersed in a bar setting that my brother suggested I play. Surrounded by pub games like darts and ​pool, the atmosphere was typical bar room. Beer bottles on the counter ​could be picked up and thrown at the wall (or fellow patrons), with a smash of flying glass. Or, grab a pool cue and play a round.

At one point I ‘virtually walked’ over to a mezzanine area and looked out the window.

The high powered desktop gaming system required to run a good VR setup these days couldn’t quite handle it. Suddenly, my virtual character was thrown into a visual sideways disarray, and I physically felt the sensation of falling.

My brain processed the visual cues in a weird way, and I felt dizzy. I had to immediately close my eyes, kneel down to the ground, and slowly take the headset off. Otherwise I would have fallen over in the middle of the living room!

I don’t want to put you off VR, not by a long shot! Not all games suffered the same visual glitch, and most of the time the VR gaming system kept pace ​with the gaming action.

I only use that example to show you that ​the experience is as ‘real’ as our brains ​interpret in terms of the sensory inputs reflecting our current state.

The Near term Future of VR

VR Wedding videos seem to be the hot technology commodity at the moment. Imagine capturing your big day and then being able to re-live it frame by frame.

Okay, you get the picture. And no, the level of salacious details as the above scenarios outline are probably not forthcoming on a VR wedding video.

What about the Wedding Industry

​A quick Google search for “VR wedding” shows us that it is much more of a novelty at the moment than a practical tool. Three of the top search results return an article (and video) that one might expect at this early adopter stage of VR and weddings: some Japanese guy conducted a virtual wedding where he married an anime character!

No joke. Indeed it seems as though ‘groups of men’ are marrying anime characters these days in Japan.

Having spent time living in Japan in the early 2000s, this news didn’t really shock me. I don’t mean to offend his taste in life partner, but is marrying a fictional character really wise?

​Anime character weddings in Japan aside, I don’t think a virtual wedding is in the works for most couples. After all, would a virtual kiss be legally binding? Or perhaps the courts will rule that there has to be some physical smooching to seal the deal. 😀

​The big question is: Will you ​stroll down a virtual aisle ​on your wedding day?

My Take: The wedding day itself will remain firmly planted in the physical world and not the virtual. Usage of VR gear (technology) at weddings will remain a fringe perk for most couples.

Who Wants to Host a VR Wedding?

Using today’s technology, not many ​are able to host a VR Wedding! That would be quite the boring ​event if all your guests where somewhere else and plugged in virtually to your big day.

Sure, they could see and hear what is ​happening. But common, who doesn’t want to feel the actual warm Caribbean sun beating down on their back, or ​taste the wedding cake to see if it is as divine as it looks!?!

​One application for a VR wedding right now is ​to assist those who physically can’t be present to celebrate with you.

​That being said, I asked a good friend of mine recently if she had ever used a VR headset ​or would ​consider wearing one at a wedding. Her reply, “Are you crazy, I’d look ridiculous if I had that thing on my head!”

So, yeah … I guess there is that fashion aesthetic aspect to consider too.

​There are certainly valid reasons to get geared up and add a partial virtual wedding component. But does it cost too much at the present moment?

I’ll answer that question in ​the next ​article in our series, which covers VR costs, a roundup review of VR gear, and an overview of VR Wedding Services! 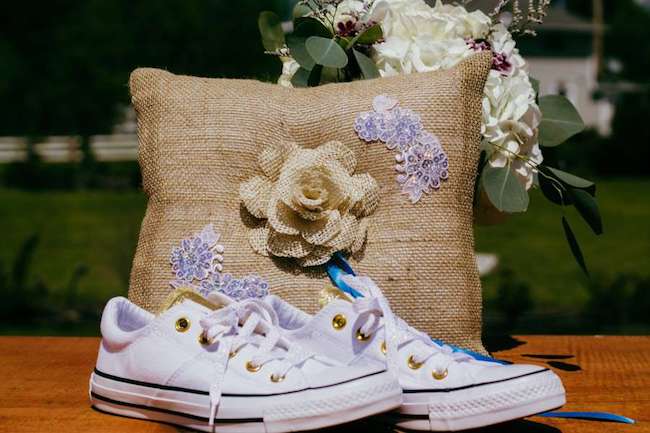 The Complete Guide to Branding Your Wedding in 9 Easy Steps!

6 Tips for Choosing Your Wedding Colors