We think a meteorite wedding band is the perfect way to elevate a common symbol of love to a whole new level of forever.

When you love someone more than anything in the world, you want to find unique ways to show them. What better way than a wedding band crafted of materials not from this world?

Meteorite Wedding Bands for Him

We’ve long searched for a jewelry design company who caters exclusively to men, and manlybands.com blew us away with its selection of gorgeous, masculine designs.

It was tough to decide which men’s ring would top our list, but this one just stood out. Made from black zirconium and gibeon meteorite, we found its sexy, smouldery gray color irresistible.

This ring’s handcrafted Damascus steel design with 3mm of Gibeon Meteorite is as unique yet classic as he is.

The pattern on this handcrafted damascus steel and meteorite ring is certainly eye catching. We love the contrast between the dark meteorite hues against the acid etching in the steel.

This 18K rose gold ring is a stunning example of why gold will never go out of style. We think the contrast of the black meteorite against the warm, rose gold hue is just beautiful.

Meteorite Bands For Her

So delicate, this titanium ring with gibeon meteorite inlay is a unique take on a classic band. This ring seems to possess a radiance that comes from the inside out.

This ring is just so cool, we had to show it to you. The design is inspired by textures found in nature (as you’ll see), and it’s one of the more unusual bands we’ve seen so far.

This ring sports tungsten, deer antler, meteorite, and rose gold copper. We know, it’s a lot going on for one ring, but trust us on this one, you’ll love it. It’s so rustic, and honestly, will stand out beautifully with anything you choose to wear with it. Comes as a set or separately.

Meteorite Bands For Both

9. His and Hers Titanium & Gibeon Meteorite Rings

Matching titanium and gibeon meteorite rings are a great way to get a lot of “oohs” and “aahs” on your wedding day (and every day after that…). This set is traditional, yet totally untraditional in the best way ever.

10. His and Hers Opal, Meteorite & Moissanite Rings

Opal is so eye-catching, when we saw these gibeon meteorite and opal rings, we were mesmerized. This one’s a complete set, including a solitaire ring with 5mm blue-green moissanite, and custom engraving to make them uniquely yours.

11. His and Hers Rose Gold & Tungsten Rings

Similar to the women’s band, these rose gold, tungsten matching rings are radiant enough on their own, but together, they shine brighter.

We’ve done a little homework about meteorite wedding bands, and there are definitely things you should know in order to make an informed buying decision.

Not just any ol’ type of meteor makes up a quality wedding band. It takes a certain classification. Let’s have a quick science lesson on the main types of meteorites:

These are made up of mostly silica (here on Earth, you’ll find silica most commonly in quartz), and are the most common meteorites.

Considerably less common than stony meteorites, metallic meteorites represent less than 10% of what comes to Earth. These are made almost exclusively from nickel-iron, but also sometimes contain small amounts of sulphide and carbide minerals.

Pallasite meteors are widely coveted for their beauty, as they contain a form of magnesium-iron silicate called olivine embedded within the metal.

Olivine is gorgeous when polished, making stony-metallic meteorites the most coveted when it comes to jewelry making.

While shopping around, you’ll probably notice Gibeon and Seymchan meteorites are the most commonly found in jewelry (made from metallic meteorites). These are chosen for their reasonable availability, and sturdiness. They’ll resist rust better than other more iron-heavy metals as well.

There are a few ways you can tell the difference between real meteorite, and artificial:

As with every major important purchase, you need to know the pros and cons behind purchasing a meteorite wedding band. After all, this is going to be forever.

If you’re looking for a wedding band that is really different and makes a statement, a meteorite ring does just that. Because of the nature of the materials, no two pieces are alike. Giving the one you love a ring that was made just for them, can never be replicated, and comes from the far reaches of the galaxy, it doesn’t get much more romantic than that!

3. Titanium Wedding Bands to Stand The Test Of Time

Did you find this post useful? Then save THIS PIN below to your Wedding Bands board for later! 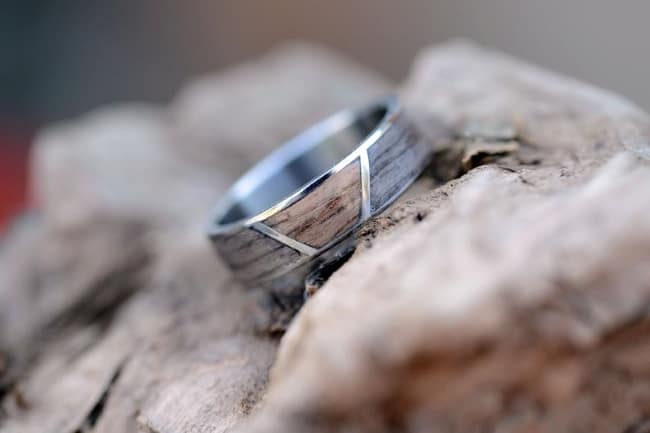 9 Titanium Wedding Bands to Stand The Test Of Time 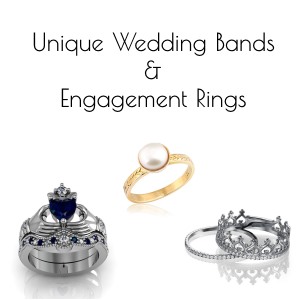