You’ve been married for 12 years and I bet you feel like you know your spouse inside out. Now that your anniversary has rolled around, it’s time to prove it! Cast your eye over my top picks for 12th anniversary gifts and see which ones are a perfect match for your beloved.

​What is the Traditional 12th Anniversary Gift?

One of the most brilliant things about anniversary gifts is (unlike birthdays) they have special suggestions and significance. Each anniversary has a different symbolic inspiration to get your search started. However, when I began writing this post I discovered there’s some difference of opinion on what marks the traditional gift for the 12th anniversary. Some sources say linen, while others say silk. Working out which one is correct can be a challenge.

To get to the bottom of this mystery, I consulted my go-to guide for all things anniversary gift related, Emily Post’s The Blue Book of Social Usage, which had been helpful for our article on 4th year anniversary gifts. Penned back in the early 20th century, this fascinating book reveals the gifting conventions that continue to guide many of our traditions today.

Did you know that before 1937 there were only gift conventions for a handful of milestone anniversaries? That year, the American National Retail Jeweler Association (now known as Jewelers of America) introduced an expanded list of gifts and keen eyes like Emily’s recorded them for posterity.

So what did her blue book say? That this 12th year is all about linen!

If you’ve got your heart set on choosing a modern alternative, you’ll be pleased to know the possibilities are endless – the modern gift for the 12th wedding anniversary is something with pearls or colored gemstones.

The beautiful flower for your 12th wedding anniversary is the peony. Symbolizing many sweet things – romance, compassion, honor, good fortune, and even a happy marriage – it’s an excellent gift option.

This year, celebrate with the jade gemstone. Signifying harmony and balance, as well gentleness and nourishment, jade has as many meaningful connoations as it does shades of green.

12th Anniversary Gifts for Her

Make her year with a thoughtful linen gift that’s sure to remind her of why she fell for you in the first place.

Whether she’s a writer of lists, keeps a journal, or likes to pen poetry and prose, a linen notebook is a smart choice. Take it to the next level by adding a dedication at the front or hiding a secret love letter among the pages.

For some women (ahem, myself included) there is no such thing as too many pillows. Indulge her love for all things comfy with this classy way to display your special date.

This soft, beautiful linen scarf is not only a thoughtful gift, it’s also eco-friendly. Available in a host of colors, you can choose the shade that best suits her style and pairs with her existing wardrobe.

by The Bouqs co

As the traditional flower for the 12th anniversary, peonies arranged in a charming bouquet are sure to win a smile. That said, these ruffled blooms aren’t easy to find out of season. You’re most likely to be in luck if your anniversary falls between late April and early June.

There are some things in life you shouldn’t skimp on and your bedsheets are one of them. Give your wife the gift of a more comfortable night’s sleep with good quality linen sheets. They might even entice her to stay under the covers and snuggle with you longer than usual!

Perfect for lounging around the house in, this oh-so-handy tote makes a thoughtful and useful gift. Machine washable and made with 100% Oeko-Tex certified linen, this bag can be used as a gym bag, for the grocery run, or anything in between.

Get a soft and airy, luscious linen duvet cover for your sweetheart this anniversary and then make sure you plan lots of romantic evenings reading, watching TV, and chatting in bed.

This is such a unique, cool idea! Have the lyrics from your wedding song printed on linen and beautifully framed. You’ll both remember that magical moment you took your first dance together as husband and wife every time you look at it.

If your anniversary falls outside of peony season, this linen rose is a lovely way to gift a flower. She’ll treasure it always, knowing the petals will never fall off. With a palette of gorgeoues hues to choose from, you might just end up getting her a full bouquet!

Have you been buying your wife lots of gorgeous jewelry over the years? Then this is the perfect year to give her somewhere to store it all. And if you’ve got the budget to splash out, delight her even more by hiding the next item on this list inside…

Not only are these jade earrings drop-dead gorgeous, they also feature the precious stone associated with the 12th anniversary. Make sure she feels wildly elegant on your special day with these magical earrings.

12th Anniversary Gifts for Him

Wrap up a fab gift for your main squeeze with our linen gift suggestions for men.

Make him feel equal parts sophisticated and relaxed with this stylish robe. Woven from 100% linen and naturally soft, he’ll want to cozy up in it every single night.

I love this simple and yet sweet idea. The maker will inscribe your personalized message on this funky linen tray. Showcase your wedding vows, a quote he loves, or a saying you share. It’s also super handy for anyone who’s got a habit of misplacing their keys.

​3) Linen Apron for the Chef

If your hubby loves stirring things up in the kitchen, this chic linen apron will help save his outfits from any splashovers! Plus, with its stylish design he’ll feel like he’s hosting a cooking show.

A classic suit jacket is one of life’s essential and what better time to gift him one made of linen? Get his size from his current favorites and surprise your husband with this thoughtful addition to his wardrobe.

Make sure he always has a quality hanky on hand by gifting him a set of soft, strong linen ones. Add his initials for an extra touch. If he’s a crier, package it with a weepy movie that you can both bawl your eyes out to. Or, if he’s likes to cook spicey dishes, add in some hot chilies so he’s got all bases covered next time he’s tearing up in the kitchen.

Gift him a space to chill out, catch up on his emails, or lose himself in a good book. This awesome linen armchair has such a stylish air that will look great in an office, lounge, bedroom – you name it.

Is your man almost as crazy about his tablet as he is about you? Then there’s a good chance he’s going to love this handmade buckram linen case.

​8) Cuff Links with Your Song on Linen

Elevate the classic gift of cuff links with a customized pair that features your special song printed on linen. He’ll smile every time he pairs them with a suit and he might even ask you for a dance! 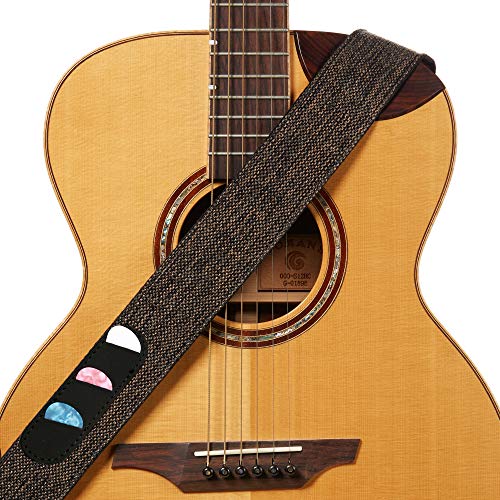 If you’re married to a guitarist you’ll know how important a good strap is. Gift him one that will make rocking out even easier and subtly hint that you’d swoon if he dedicated a song to you.

Surprise him with his favorite bottle of wine or champagne wrapped in a linen bag and toast your 12th wedding anniversary in style.

Now that you’ve got your linen anniversary gift inspirations all sewn up, I hope you and your honey have a wonderful time celebrating a dozen years of marriage! Until next year (hint: it’s Lace), we wish you all the best!

*Did you find this post useful? Then save THIS PIN below to your Anniversary Gifts board for later!* 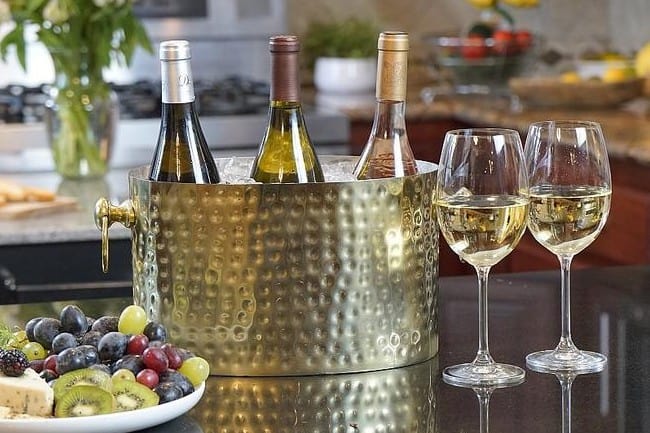 21st Anniversary Gifts For The Romantic At Heart 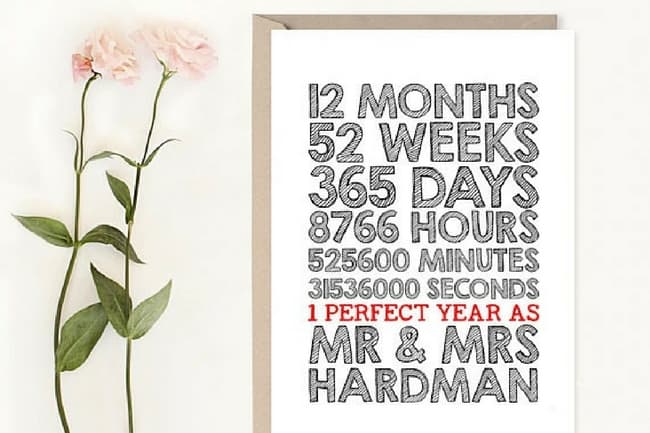