I was so happy when I received this wedding submission from Hearts & Horseshoes Photography.  Beside being fond of the dry lavender they used for the ceremony decor, this natural relaxed rustic wedding looks like a glorified family picnic.  It is absolutely fabulous and makes me want to go on a fancy picnic this weekend too!

The wedding was hosted in a garden, so naturally there was a rustic theme.  The wedding very relaxed and natural, yet still very elegant.

How many guests were invited and what was the final guest count?

“We invited a little over 200 guest, but the final guest count was around 130. A lot of our guests that we invited were from Europe and many of them were not able to make the journey.”

Was it difficult to narrow down your guest list?

“Yes absolutely! We did two things, first we allotted an equal number of invites each to our parents and ourselves. We had to do some negotiations afterwards but managed to stay quite close to our original goal. We also realized quite quickly that every time we saw or thought of someone else we would want to invite them, so we just made the decision that we wouldn’t add anyone to our original list no matter what and just stuck with it. It was hard though!”

“I bought my dress from JLM Boutique – it had a beautiful beaded body with straps and a low v in the back. The skirt was layers of tulle and full but with movement. The bridesmaids all chose their own style of dress from Alfred Angelo, but they were the same color, indigo, and all chiffon and knee length.”

What was the best advice you received while planning your wedding?

“Don’t try and do everything yourself, there are actually a lot of people who really want to help and be involved. Also, bridesmaids don’t need to match. I really liked what we decided on, same fabric, color and length but different styles. My friends are all so different and putting them in the same dress probably would have made some of them uncomfortable.  Also really pay attention to what’s going on, I know everyone says it but it’s incredible how quickly the day will go.”

All of our ceremony music was instrumental and we found a fabulous guitarist, Chris Wooley.

Processional – All You Need is Love (Beatles)

Did you go over or stay under your budget?

“We set ourselves a budget and stuck to it pretty well. There were certain things we wanted to invest money in and others that we were less worried about – so we worked off of that and some online tools to divide up what we were going to spend. For us the most important things were everyone having fun and the day being well captured, so food, drinks, photo and video were a priority. We saved money on flowers because the surroundings were so beautiful. A big unexpected cost for us was how much the rentals were!”

“We used all wildflowers in yellow, cream and purple colors.  I asked the florist to make it seem as if we all went into a field that morning to pick everything.”

Where did you get your wedding invitations?

“We used Wedding Paper Divas for both our save-the-dates and invitations. It was probably the aspect that we were least interested in, so happy not to put a lot of effort and money into them.”

What wedding favor did you give your guests?

“We asked our caterer for their beef brisket rub receipt, that was going to be served at the reception. We then used individual jars from IKEA and filled them with the mixture.”

“Be really mindful of your guests – we talked a lot about little touches and whether guests would even notice them but ultimately they did and to make them feel special when they’ve all made such an effort to be with you it’s really great. Another tip, unless it really is too far out of your budget, get a day of coordinator. You won’t regret it.”

Where did you go on your honeymoon?

“We traveled from California to Germany by car and then boat. It was an incredible trip!” 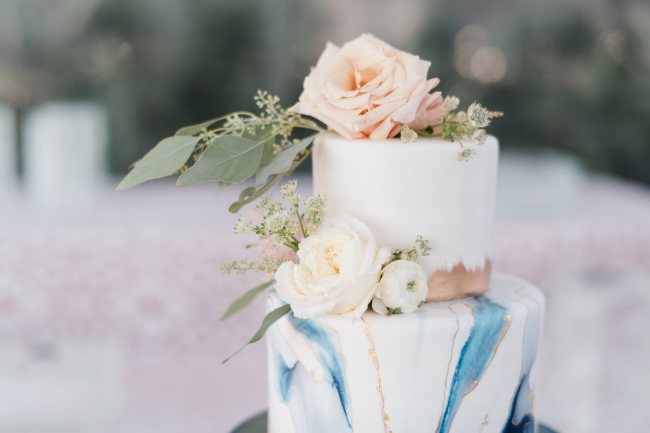 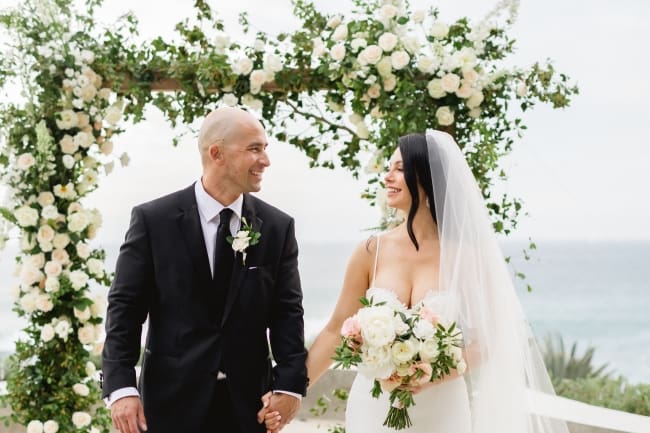 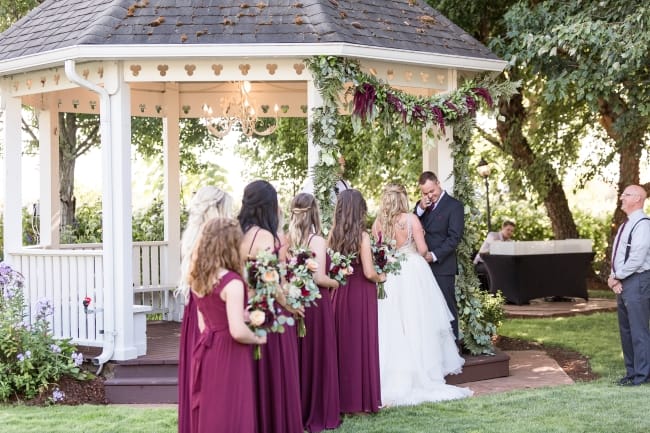 Garden Wedding in Salem, OR