Questionnaire answered by the groom, Geoffrey.

“We met online, because of an app called Hinge. We were both so excited for our first date that we ended up meeting a day early for a quick bite to eat, that turned in to several hours. We both remember the smiles on each other’s faces as we rounded the corner and caught first sight of each other.

“After that, we’ve been inseparable.”

How did your proposal go (if there was one)?

“We were on a secluded beach in Washington in the Olympic National Park. (48.1726988, -124.0216279 to be precise) We had been on a week-long vacation in the Pacific Northwest, Oregon and Washington. I knew before we left that I was going to do it, just had to find the opportune moment. As the end of the trip was nearing, I knew I had to find a beach. Highway 112 runs right along the beach as you head toward Olympic National Park, so at one point, I pulled over and said ‘Let’s go down the water and check it out.’ I put the ring in my pocket and followed Bridgette down to the water. Being a nervous wreck, she walked ahead of me on the beach a little way, I caught up to her, gave her a hug then went down on one knee. In the end, it was a huge success, she said yes!”

What was important to you about your wedding?

“In no particular order:

Being surrounded by an intimate group of family and friends

Great food (tacos. Literally, tacos were a must)

That it occur on the anniversary of our first date

We wanted to feel relaxed that day, so we could remember the experience, as opposed to a whirlwind of events that 2 days later you look back on and say “Wow, what actually happened that day, I don’t remember?”

What was your wedding inspiration?

“A relaxing day in a galaxy far, far away.”

What were your wedding colors?

What made your venue “the one?”

“It was large enough to house the guests who were staying, and the two perfectly placed palm trees in the back yard. The house itself was well-curated.”

What were the highlights of the ceremony?

“Our vows, written ourselves, which were personal and meaningful with just the right amount of humor that suits our personalities in the perfect way. The sprinklers going off right after Jasmine finished her reading could not have been timed better. Jenn rushing to turn them off, while Brian kept his hand over them saved the moment. The end of ceremony kiss was perfect, followed by dancing away to the music of the Cantina Band.”

What song did you walk down the aisle to?

What were the highlights of the reception?

“The randomized playlist of our favorite electro-swing music. No DJ needed! The food, the food, the food! The speeches! Finishing the second half of the really expensive bottle of Riesling. Beat Saber in the basement. Talking to the people at every table – it was nice to have so many friends and family attend.”

What song played for your first dance?

What made the day special and personal to you?

“Lanterns on the tables representing some of the more famous locations in the Star Wars universe, along with the cards that had a relevant quote. Tatooine, Kashyyyk, Coruscant, Alderaan, Naboo. “May the Force be with us” in the dessert table stand. The honorary table setting placards for C-3PO and R2-D2. Bridgette’s dress was a complete surprise. Geof married his very own Adleraanian princess that day. Jedi symbol shirt studs and cufflinks. Bridgette’s best friend from grade school brought a pearl bracelet given to her by Bridgette’s mother many years prior and asked Bridgette if she would like to wear it in the ceremony.”

“The table decorations, the music arrangement, the homemade chocolate chip cookie favors, the salted caramels on pretzel base.”

What was your favorite part of the day?

“That Bridgette and I got married. That every moment was captured by our incredible photographer. Tromping through the desert to get the post-ceremony pictures. Walking out together down the aisle.”

What was your biggest surprise on your wedding day?

“Bridgette’s blue dress and cape! She’s so sneaky! Color this guy totally surprised in the best possible way! The wedding presents for each other – the shadow box for Bridgette and the constellation map for Geof, with Orion prominently pointed out. The sprinklers were definitely a surprise; our version of rain on our wedding day signifying good luck? I’ll take it.”

What advice would you give other couples planning their day?

“Make the wedding YOUR day. Don’t worry about what the guests might want, or think. It’s about you and your soon to be spouse. Talk out the decisions, sometimes you may both be thinking along the same lines and you can take a good idea and turn it in to a great one. Unexpected surprises are bound to occur. You can’t anticipate them, so do your best to roll with them. Sometimes, they turn out to be pretty funny. More money does not equal better – follow your heart and if something doesn’t feel right, don’t do it or you’ll just regret it later.” 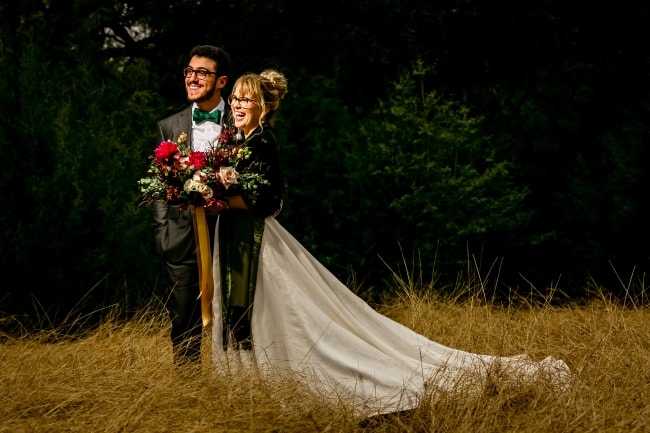 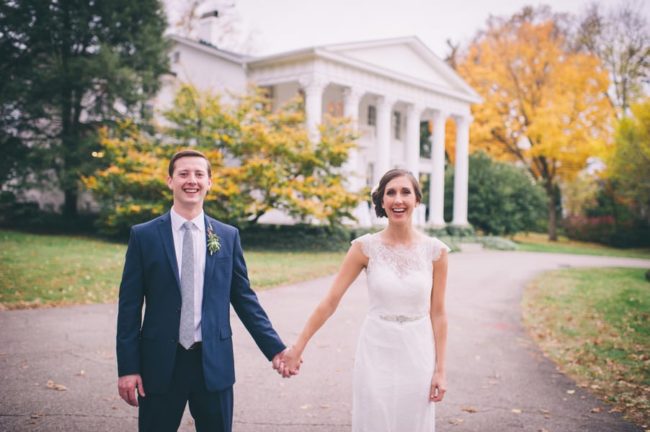 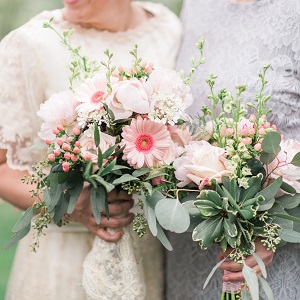