Garden Wedding in Salem, OR

Photographer’s Comments: “Luke and Courtney tied the knot at Green Villa Barn and Garden in Salem, OR on a cool August day. It rained early in the morning but cut it out right in time for photos to begin with beautiful weather. The whole day was flawless.

“The sweetest first look took place under a vine arbor, where Courtney read Luke a letter before he finally got to see her.

“The ceremony happened in front of the white gazebo with gorgeous greenery draped over it.  The reception had some of the best tacos I’ve ever had, toasts that left no eye dry, yard games, and lots of dancing.

“We wrapped up the evening with sunset photos in the orchard and a grand sparkler exit! Like I said, flawless.”

Q: Tell us about your wedding!

“Our theme for our wedding was classy and elegant. We really wanted it to be simple, yet beautiful! We are both Christians, so we had a few traditions mixed into the ceremony. One was having a sand ceremony. We both poured two different colors of sands into an hour glass to represent us becoming one.  Another was taking communion together and having a family prayer.”

“The bride’s parents are very into DIY. Multiple of the decorations were hand made by them, including a hanging greenery piece above the head table for the bride and groom. Again, our theme was simple so we focused on having a lot of greenery and floral pieces. The center pieces for the reception were ferns and candles.”

Q: What were the florals like in your wedding?

“Yes they played a very important part. The bride is obsessed with flowers and she wanted everything to have a touch of floral in it. The color theme for the bouquets were a dark wine and blush with greenery. There was either greenery or flowers everywhere throughout the venue, including the cake. Our background for getting married was a pergola that was covered in greenery vines and wine colored flowers.”

Q: Did you personalize the day in any way?

“We had two favorite parts. The first one was our first look and the bride read a letter to the groom before he turned around. After that, the mother of the bride prayed for us. The second was the bride walking down the aisle. Everything was in slow motion for the groom and he pictured all of the memories they were going to make for the next 60 years. We got a DJ who helped keep everything on track and on time.”

“Two months into the relationship, the bride, semi joking around, went to try on wedding dresses with her family. She was just trying to get an idea of what she might like and all of sudden, found the one. A month later, when the groom finally proposed, she pulled him aside and let him know she already had her wedding dress. He laughed and completely fitting for their relationship and personality. The bride’s dress is like a Cinderella dress, with beautiful detailed beading on the top half. It also has a deep V back. The groom’s outfit was a dark grey suit, dark grey vest, white dress shirt and a wine colored tie. We decided on the grey because it went best with the bridesmaids wine colored dresses and flowers.”

Q: How did you meet?

“Luke’s family moved into town from Michigan because of a new job opportunity for his dad. Our moms met a few months previously when Luke’s mom was looking for a house. Courtney’s mom invited his family over for dinner the first night they got into town, and invited them to stay at their house until his family’s house was ready to move into. We didn’t know anything about each other and had no expectations. Courtney, as usual, arrived to dinner that night 20 minutes late only to walk in and see Luke sitting there. Luke could not take his eyes off of Courtney the whole time at dinner. He then texted her that night, just so she had his number. Three weeks later, we were dating. Three months later, we were engaged. Luke proposed at a pumpkin patch with all of her friends and family around. Nine months later, we got married.”

Q: What was the most anticipated or special moment of your wedding day?

Q: Do you have any wedding planning or marriage advice that you’d like to share with other couples planning their day?

“Wedding planning is so crazy and up and down with emotion. People just want to love on you and help you, so receive their help with an open heart.” 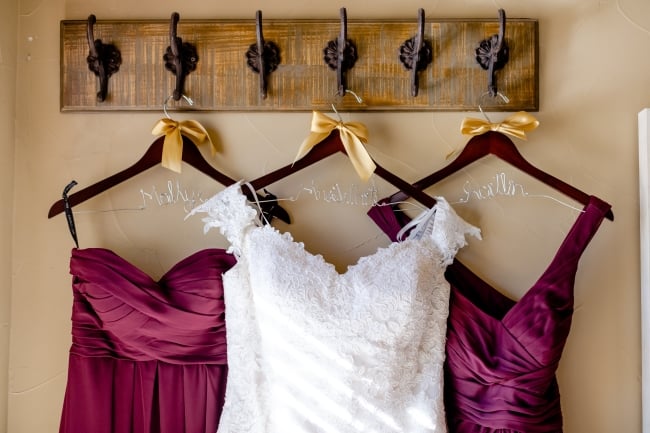