‘We are all a little weird and life’s a little weird, and when we find someone whose weirdness is compatible with ours, we join up with them and fall in mutual weirdness and call it love.’

“Dr Seuss wrote the perfect description of Erica and Mike’s love, and their bridal party, family and venue really accentuated that sentiment.

“Their day was filled with laughter, art, weirdness, and a whole lot of love.”

“We wanted our wedding to be very personal. We had been to weddings in the past where the couple getting married had made all of the choices themselves, and it felt very personal and real. Conversely, we had also been to weddings that felt bland, where you couldn’t tell much about the couple from the ceremony or reception. We wanted something that was unequivocally ours.

“The idea of a theme seemed a bit overwhelming after doing some thought. We had originally thought of having a  50’s themed wedding, but we ended up mixing elements from Erica’s Jewish culture and our shared love of punk and surf music.

“We used some elements of traditional Jewish wedding ceremonies, such as the Chuppah, symbolizing the home that we are building together, the hora, and breaking the glass. However, our ceremony was legally a quaker ceremony, and we tried to incorporate some quaker traditions, such as having our guests share in the ceremony and recite vows with us.

“We chose peach and turquoise as our main color palette, and matched the bridal party ties to our tablecloths and napkins. Flowers loosely followed this palette as well, but more on that later.

“Most of our decor was done by ourselves or our friends. We were lucky in that the space that we got married in was beautiful already without any decorations.

“The Chuppah was originally made by friends of Erica’s parents for their son’s wedding. They loaned it to us, and we bought some sheer cloth to spruce it up a bit. We had a trial run of putting it together, and ended up having Erica’s uncle and father put it together on the day of in the medicinal garden that we were married in.

“We decided to have a small ceremonial cake, so that we could cut something, and also a large donut tower style cake from our favorite donut place in Philadelphia, Federal Donuts. We topped the donuts with miniature bunting that Erica painstakingly made in the week leading up to the wedding. We also topped it with plastic dinosaurs. Mike had the idea to add plastic dinosaurs to the donut tower while driving up the New Jersey turnpike the weekend before the wedding. Considering how much thought we put into everything, this was probably the only detail that had no forethought.

“Friends of ours who could not make it to the wedding mailed us a large inflatable cat with the request that we set it up in their stead at our wedding.

“Erica really loves Halloween, and she imparted that love onto Mike, and we really wanted to see that represented in our celebration. This was a great way to tie that interest in.”

“Our friend Jess Monte has been working with flowers for a long time, in academic and professional settings. When we told her that we were getting married, she immediately offered to arrange flowers for us. They were grown at One Flew Over Farm, in Mays Landing, NJ.

“Jess worked with the farm to curate a mix of plants and flowers featuring calla lilies in boutonnières, bouquets and centerpieces. The selection of plants and flowers perfectly matched the marriage of our joyous celebration and the macabre ambience of our chosen venue, which is a medical oddities museum.”

“We had a lot of activities for our guests to enjoy at the wedding. In particular, the band we chose was very important to us. Our first date was a West Philadelphia Orchestra show, where we danced together for the first time.

“We were able to have them play at our wedding, with both traditional slavic and klezmer tunes, a 30 minute hora set (that our family and friends still talk about!), and some 60’s era surf music. They even played our first dance, which was ‘Do You Wanna Dance’, and was played in the style of the Ramones with a splash of klezmer in the form of a horn solo.

“We took dancing lessons leading up to our wedding and surprised everyone with a swing dance for our first dance. We really enjoyed dancing at our wedding and we think that many of our guests did as well. There was even a circle pit!

“We also set out temporary tattoos and postcards with stamps for all of our wedding guests. They were both a huge hit! Mike writes and mails many postcards on a regular basis, and had been collecting postcards for years. He decided to bring his postcard collection to the wedding and have the guests write messages to us, or to anyone else!

“As a gift, Mike’s parents bought a large untreated slab of wood, which they brought to the wedding to have guests sign. Afterwards, they brought it to their house, varnished the wood several times, and built it into a bench to be placed into our backyard.”

“Erica originally bought an off-white dress from a vintage shop. When she showed it to her mom, her mom was upset that she wasn’t involved in choosing the dress. Erica humored her mom and went with her to another dress shop and ended up getting a great deal on a dress right off the rack. It fit her perfectly, and did not require any adjustments. Erica never wears white and could not have pictured herself in a traditional long, flowing dress. The dress she chose suited her style well and was a great choice for dancing.

She wore turquoise flats for the ceremony and changed into white doc martens before the first dance.

“She wore a short birdcage veil.

“After much research on wedding hairstyles for women with short hair, she decided to style it herself, and focus more on getting her makeup professionally done which proved to be a great decision.

“Rather than choosing a specific dress or suit for the wedding party to purchase, we decided to let everybody have license and choose their own clothing which could hopefully be used later as well. We also liked the aesthetic of non-matching wedding parties.”

“We met because Mike messaged something kinda silly to Erica on OKCupid. She almost didn’t respond, but then she did, and we talked a bit, and then she asked him out on a night of dancing to see the West Philadelphia Orchestra, a band they had both seen before. Even though he had a very important medicinal chemistry test, Mike decided that he would meet this Erica, and see what she was about.

“He was a little nervous when he saw her New Jersey license plates, and she was nervous because she saw he biked and thought he wasn’t into people who drove cars.

“Also, we both thought the other person was vegan. Not sure why. We both drive cars and ride bicycles. Neither of us is vegan.

“Before getting engaged, we dated for 3 and a half years. During that time, we went on a bunch of trips, sang a lot of karaoke, and bought a house together.

“Erica proposed to Mike in the photobooth at El Vez. It is widely known to be the best photobooth in Philadelphia. We might be the only people who say that. Mike was so surprised, and was not suspicious at all. Really more confused about why Erica wanted to go for brunch to El Vez, a restaurant that doesn’t even have brunch (!). If you wanted to know, I think we got tacos.

“We decided that because we love photobooths, and our proposal was inside of a photobooth, it made sense to have one at our wedding for all of our guests to enjoy.

“Our first dance was pretty spectacular. We had not heard West Philadelphia Orchestra’s version of ‘Do You Wanna Dance’ ahead of time, so we were surprised in the best way by their rendition of the song, and after months of practice, we nailed our dance.Mike was very excited to be lifted up on a chair during the hora. We both felt very supported by our family and friends.”

“We are glad that we spent time intentionally thinking about our wedding ceremony. Our friend Sarah Myers helped us think about what was important to us, and why we were getting married. With her, and our officiant James Meier (who is also our roommate and very good friend), we crafted a ceremony that felt personal, inclusive, and just comedic enough.

“We accomplished this by including vows said by our guests, quotes from Buffy The Vampire Slayer and Futurama, and a handfasting ceremony, where we literally tied the knot.

“We realized that having the right photographer is so important. We met a lot of photographers who capture weddings the same way, and were very excited to have found a photographer (Wide Eyed Studios) who captures stories and moments in a unique way. Don’t skimp on your photographer!

“It is very important (if you are staying in a hotel) to check into the hotel before the wedding, or at least let them know that you will be checking in late. When we got to the hotel, we were the last of the guests to check in for the night, and they had messed up the reservations at some point, which caused us to not have a room assigned to us. It took Mike an hour to check in, and the whole process was not resolved until more than a week after the wedding.

“Erica regrets not spending enough time visiting with all the guests and also regrets stressing so much about the guest list.

“Mike is glad that he got to dance so much. He regrets not dancing even more. 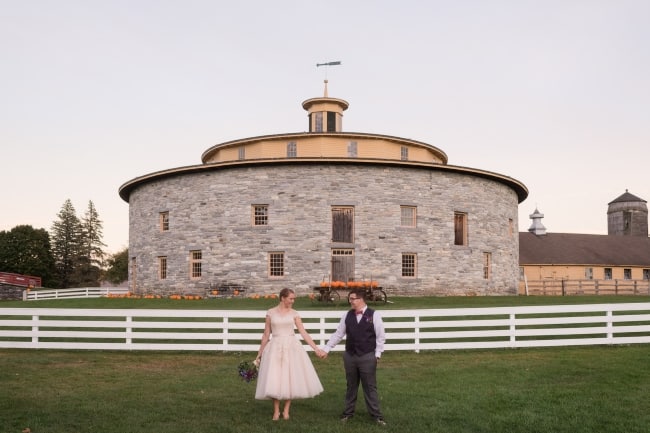 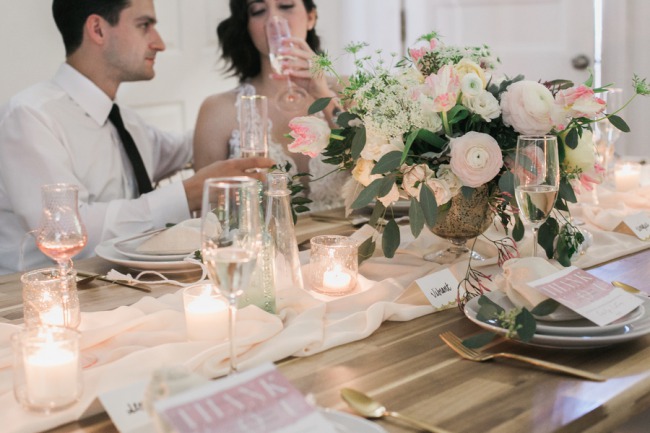 Industrial Chic Styled Wedding at The Parlor at 415 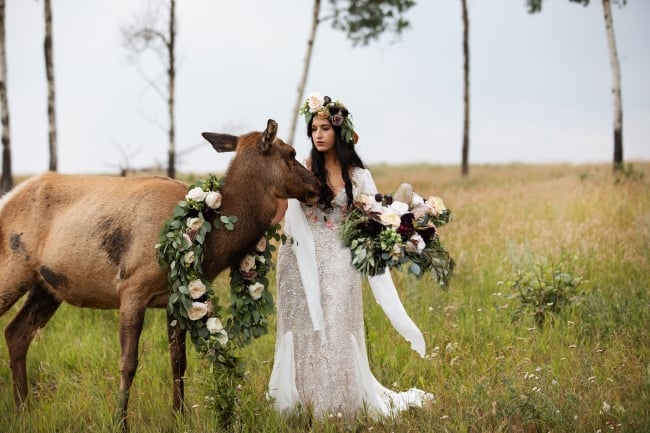