“We had our first official date on April 5th, 2015 and kissed on a NYC sidewalk in the West Village under the moonlight. The rest, as they say, is history.”

Marilyn + Adam sought to have an intimate non-traditional wedding followed by a crazy fun dance party to celebrate their love. Adam grew up in the area so the couple returned to DC from the “Big Apple” (NYC)  with a close group of friends and family. They wanted the day to be relaxed and romantic with a vintage feel.

The two chose the Historic Tabard Inn near Dupont Circle as their venue when they fell in love with the unique decor and open floor plan. They wanted their guests to get to know each other, eat, drink and dance at the same time!

We walked around the Dupont Area right near the hotel for photos with a charming urban feel. They had their first look in front of the beautiful Iron Gate Restaurant before the ceremony. We even got to meet the Inn’s mascot, Dante, out front!

Marilyn + Adam held their ceremony outdoors on the Inn’s porch. It had an amazing skylight and was covered in rustic exposed brick + ivy with candles lining the aisle. The setting was simple and romantic for Marilyn + Adam to exchange their vows. Marilyn’s sister had a beautiful reading and the two’s close friend officiated.

The reception was held in the Inn’s historic rooms upstairs and decorated with greenery and hints of gold, blush, + lavender. Small candles and floral details complimented the space perfectly. The two swapped the traditional wedding cake for an A- mazing doughnut tower!

Family is so so important to these two and they really wanted to honor them. So after their first dance, they had a song dedicated to each set of parents and Marilyn’s grandparents. Incredible DJ’s blasted some awesome tunes and the dance floor definitely felt electric all night long!

“We actually had one of our first dates at the Tabard Inn almost two years prior and it meant a lot for us to complete that memory with our wedding near the same spot we dined at. Tabard Inn was the only venue we actually saw in person and we immediately fell in love with Judy Ingabire, she sold us with her spunk and easy going personality.”

“We knew we didn’t want a traditional wedding format from the very beginning. We wanted an open floor-plan that allowed guests to mingle. We come from very different backgrounds, bride’s side is Cuban from Miami and the groom’s side is Polish, Hungarian and Czech from Pittsburgh. We wanted to allow folks to get to know each other while allowing them flexibility to dance, dine and drink all at the same time. We coordinated with Judy to have plenty of mismatched sofas and love-seats giving the venue a home-like and very welcoming feel. Overall, our wedding was all about bonding in a casual atmosphere without all the traditional trimmings.”

“Adam and I met at work. He lived in DC and often traveled to the NYC office at least twice a month. Although we met in October 2014, we didn’t actually get to know each other until March 2015 after a company-sponsored football game in several inches of snow.

“We bonded over our love of movies and music and joked about exchanging movie reviews over the film Whiplash. What Adam didn’t know was that I used to write professionally. Lo and behold, after watching Whiplash, I sent him a full film review on a Friday night. After that, we shared jokes over films like Point Break (the original) and a few other classics.

“We had our first official date on April 5th, 2015 and kissed on a NYC sidewalk in the West Village under the moonlight. The rest, as they say, is history.” 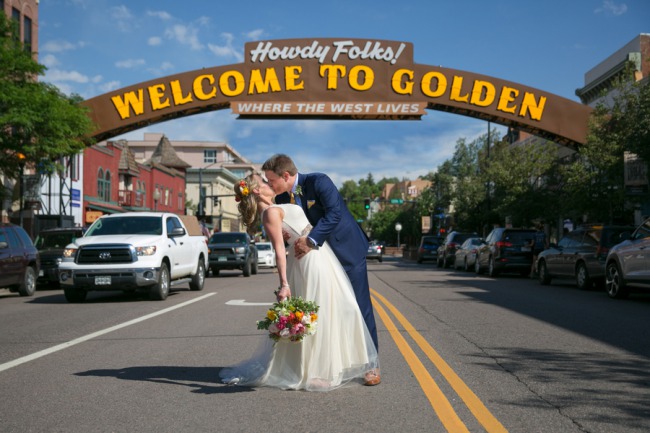 Festive, Foodtrucks & Fun for a Summer Wedding in Colorado 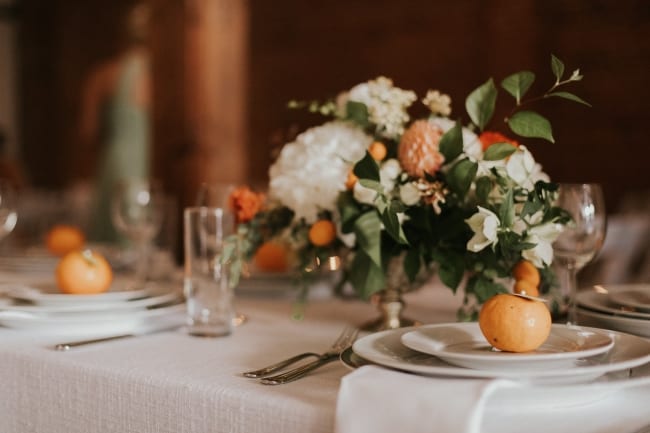 Wedding with “Oranges Theme” in Seattle