Photographer’s Remarks: “The groom is an avid fisherman and the bride is a marine biologist, so of course their wedding had to reflect that – they said their I do’s on the sand and danced the night away at Sea World and enjoyed some shark, orca, penguin and sloth encounters along the way.

“They used a beach color palette with blues and whites with a bit of orange and some sea shells mixed in. The bride and groom have known each other since high school so the vibe was fun and filled with laughter.”

“He is an avid fisherman and she is a marine biologist, so they are both very aquatic people. We wanted to have our wedding themed and colored like the beach. Lots of blues and whites with some green and orange mixed in.

“We also had a very large representation of the groom’s paternal family who are Danish. His grandfather and many of his great aunts and uncles came to the US and the groom’s father was the first of his siblings to be born in the US. Being that there are such strong ties to the Danish traditions among his family, there was Danish Akavit, the company from Denmark that makes the Schnapps, and Danish songs to celebrate the wedding.

“We couldn’t choose just one style of centerpiece, so we had a building party with friends and family to build 3 different styles of centerpieces. One filled with sand and shells and a candle, one with coral, rocks, and water with floating candles, and one with blue transparent sullifane and shells with lights to brighten up the colors from the materials and shells.

“We also decorated a giant fish mailbox to hold all of the cards from our guests.To symbolize where he proposed on the Elk River in Southern Oregon on his grandpa’s property, we asked his grandparents to bring down river rocks from that river to use in a project. We glued shells and picture holders to each rock and used pictures from us growing up in separate ‘streams’ coming down into the confluence where they meet. The picture on that rock was our first picture together.

“Further down, there were more pictures of us while we were dating, leading up to some of our engagement pictures.”

“Our florist helped us match the beach theme to a mix of some tropical flowers as well as some beautiful regular flowers to match our color scheme. The bride’s bouquet included fun sea shells as well.Additionally, the groom spent hours in tackle stores searching for a bait to match to his boutonniere. after finding a bait of the right size and color, albeit for different reasons than he’s used to picking bait, he came up with the perfect accent to his boutonniere.”

Q4: Did you personalize the day in any way (food trucks, guest entertainment etc.)?

“Seaworld does such a great job with their food that we had lots to choose from. Pasta was an easy choice as it was the first meal that the groom cooked for the bride. The carving station satisfied the carnivores, and although it felt odd to have fish tacos at an aquarium park, they were a hit.

“Most of all, the groom insisted on the mac n cheese bar. With various toppings, that was the favorite choice of the wedding couple.”

“For a beach wedding, the couple wanted to keep it simple, fun, and not too stuffy.

“No jackets for any of the gentlemen and the ladies in fun dresses. Dark grey for the gentlemen, accented by fun sand and aqua ties as well as the bird of paradise boutonnieres made the outfits pop.

“The bride spent a long time going shopping for her dress, finally deciding on her dream dress that made her feel as beautiful as she looked.”

“The bride and groom grew up in the same neighborhood, went to all the same schools, and knew many of the same people their whole lives. However, despite their small age difference, were separated by one grade.

“They met in high school when they took the same bus and became closer when they both were on their high school’s swim team. The groom distinctly remembers where they were, what event he was going to swim, what lane he was in, and which team the meet was against when he noticed a pretty blonde cheering for him at the end of his lane. ( It was at Poway High School, he was starting the 200 free, in lane one, against Vista High School.)

“Their aquatic trend continued when they went on a date to go fish for rays, sharks, and bay bass in Mission Bay. Although the debate continues as to whether this should be counted as the ‘first date’, it was nearly 8 years to the day of then they would be married in that very same bay.T

“he proposal was a long time in the making. They bride and the groom had agreed to wait until after graduating college to get engaged, but didn’t wait until much after that before the groom popped the question.

“The groom had gone fishing during one winter break 3 years earlier with his grandfather in Bandon, Oregon for winter steelhead. Weather had been terrible, freezing and rainy the whole trip without a single bite. However, then the groom’s grandfather suggested fishing on his property  on the beautiful Elk River, the weather opened up and the groom decided that this was the place he wanted to propose.

“The very summer after both the bride and groom graduated, the groom insisted on a solo road trip for 16 hours up the coast of California to Bandon rather than the trip to Hawaii. Although this was a hard sell, the groom ‘lured’ his biologist bride with stops at the Monterrey Bay Aquarium, a stop at the beach where Elephant Seals rest, the beautiful California Redwoods, and a place the bride had never been.

“The day of the proposal, the groom planned a day of buttering the bride up with a morning trip to the Bandon tide pools for some biological adventures, followed by a visit to a local zoo that lets you feed deer, goats, rams, donkeys, peacocks, and sheep as well as interact with and pet exotic animals like snow leopards and bears. Under the guide of a stop to his grandpa’s property to fish for trout, the groom convinced the bride to saddle up in water boots and jackets for the river, the groom took the bride on a 20 minute walk trying to locate the spot he had been to 3 years earlier. After discovering he had hiked the wrong way and needed only to walk 100 ft from the car, the bride and groom decided to take a few pictures before starting to fish.

“Sneakily, the groom put the camera on video to capture the moment and pulling the ring from its hidden spot in the fishing gear. When he walked back over to the bride, she was perplexed that he didn’t tie any lures onto his rods. He revealed that that wasn’t the reason they had come here, got on one knee, and the shocked bride said yes!

“The groom knew that he would be an absolute wreck when he saw his bride come down the aisle, and they both dreaded a full blown ugly cry at the altar. Despite the tears, the couple powered through the ceremony thanks to the pun filled vows they planned for each other and the wonderful humor of their family friend who officiated the wedding.

“The planning of timing for the event was centered around a pair of special animal visits provided by Seaworld. The bride and groom were met at their reception by Tess the sloth and an adorable Magellanic Penguin. This moment was made even more special by the chance to hold both for some amazing pictures. The day was memorable with the photogenic orcas who posed with the wedding party for some one of a kind photos.”

“Keep your wedding true to yourselves. We were lucky to have everything in our wedding match our personalities perfectly.

“Rely on friends and family to help you make your day special, don’t forget to live in the moment and bask in the moments that fill your special day.

“Finally, when planning, we can’t understate the value of having experienced wedding professionals around you. Experienced vendors, like our amazing photographers and rocking DJ, helped to make the day run smoothly and provided a calming expertise to help make everything a blast!” 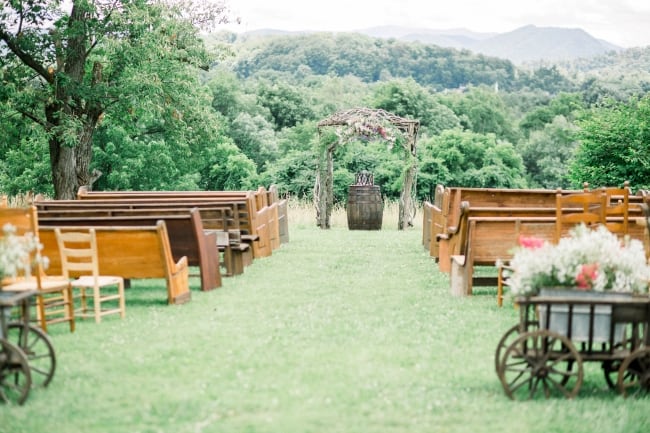 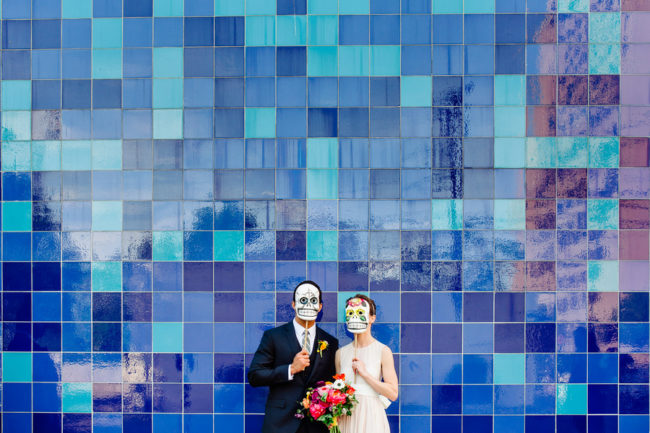 Day of the Dead Themed Wedding